Legal disclaimer: Having captured your attention with a mildly provocative title to this blog, we better do the whole legal disclaimer thing. This is an opinion piece designed to stimulate discussion within law firms about what we see as an extremely dubious trend. It is not a legal opinion or legal advice and you rely on it as such at your peril.

Most favoured nation (“MFN”) clauses, sometimes known as ‘price parity’ or ‘best price’ clauses, are agreements whereby one party promises another to always offer its best rates or terms for a product or service.

They are commonly found in a wide range of commercial agreements from long term industrial supply to distribution arrangements. However, increasingly they have been adopted in the on-line world through agreements for online travel agency sites, price comparison sites and online marketplaces where the site operators wish to ensure that they can offer the lowest price on the market.

More recently they have begun to appear in law firm panel appointments and renegotiations. In other words, the client is assured of always getting the best deal that the firm grants to any client, now or in the future.

We recently received an email from a UK-headquartered international firm that piqued our interest and coincided with our own observations. The email read in part…

"I wondered whether you had received recent reports from others about (large) clients trying to force Most Favoured Nation clauses into panel agreements. We had one recently from an important client and found the experience unsettling, for obvious reasons. That is behind us now but one cause for concern is that it only takes one client to start a snowball effect, and it could then be a race to the bottom."

We thought we would see what we could find out from both the law firm side and the client/buy side. In the case of law firms, we polled the UK top 100, an astonishing 62 of which responded. On the client side we spoke with a number of GC's and procurement people. This is what we found.

First, the results of the law firm polling. 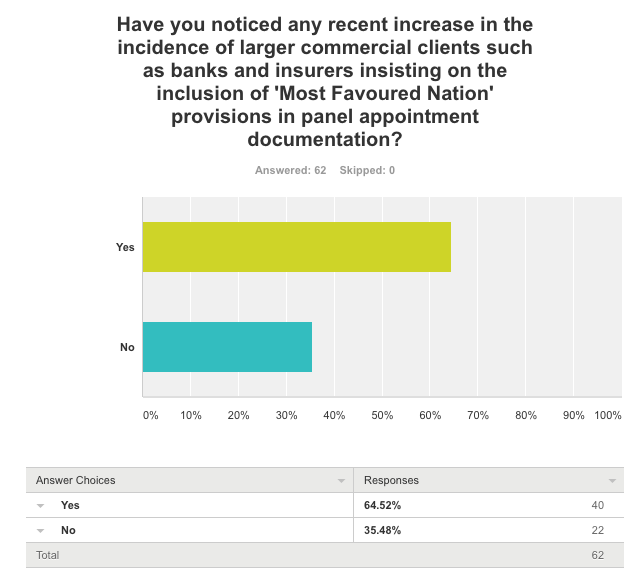 · Mainly for financial institutions but also for other major corporate e.g. airlines

· We have seen this request from large UK banks in particular 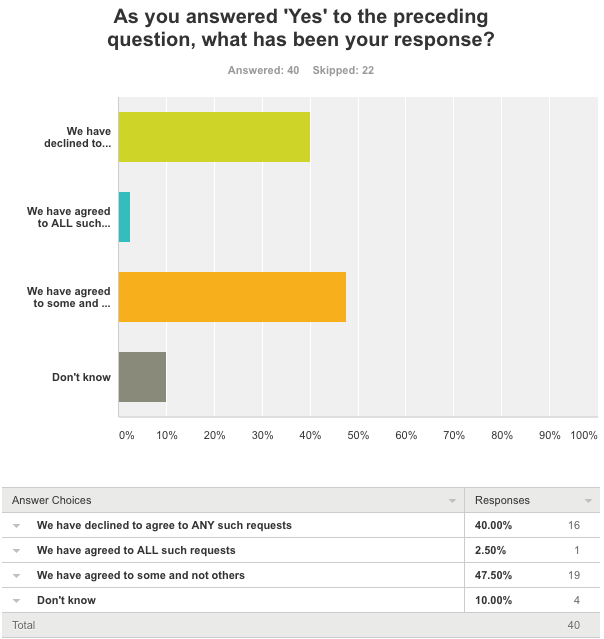 From the law firm’s perspective they are positively dangerous and a zero-sum race to the bottom. Most critically we have never seen one offset by a guaranteed minimum volume. The imposition significantly constrains the firm’s ability to engage in ‘enticement pricing’, which it should be able to do without a deleterious knock-on effect.

I have just taken out a Sky TV subscription – incentivised by £30 a month for the first 12 months instead of the usual £80. Imagine Sky’s business model if they were obliged to offer the same deal to their 11.75 million existing UK customers.

From the buy-side came the comments…

“In my experience they have their origins in large IT/services contracts where the buying organisation is buying a substantial proportion of the suppliers turnover in a sector/ country (i.e. there is a substantial volume commitment). I've seen them used with varied success in IT for example but I've never tried to use them with a legal firm, as I was never willing to give a volume commitment (which is the quid pro quo).

They generally have so many caveats about the sector/type of client that they're impossible to enforce without complete open book pricing and audit provisions that very few, if any, suppliers ever agree to.

I hate them personally - too aggressive, practically non-enforceable without huge audit expense. People use them in place of a sensible rate conversation with their suppliers.”

And from another senior person on the buy-side…

“MFN clauses. No, I don’t use them and don’t agree with them.

These are clauses whereby the firm agrees to give us (client) their MOST favoured rates, deals etc. For all time? No, we don’t do these. The rates we agree post-tender go into the contract and we hold them to that for the panel term.

I include a clause saying that if/ when we extend beyond 3 years we will have discussions in good faith to agree charges for next 12 – 24 months, whatever term we agree.

I don’t think MFN clauses are particularly ethical or fair to be honest with you and I’d argue against them internally if I were asked to put one in.”

So it would seem that they don’t even enjoy universal appeal on the buy-side.

Once again, note our caveat at the beginning of this article.

The current EU competition law position is that MFN clauses will infringe Article 101(i) of the Treaty on the Functioning of the European Union if in the individual circumstances of the case they result in an appreciably adverse effect on competition in the European Union. This is likely to happen when the parties to the agreement have substantial market power.

It is recognised by EU courts and regulators that such clauses are widely used in a number of industries including most topically with online travel agents. However the regulatory tide in the EU appears to be turning against the use of these clauses. In a number of recent EU cases in the UK and Germany, MFNs have been condemned when used by companies with significant market power.

And then there is the privacy issue. Disclosing to one client what another client is paying (which you may be obliged to do depending on the MFN wording) is a recipe for disaster.

U.S. antitrust law generally treats MFNs as vertical restraints and as a result, such provisions are judged under the rule of reason – balancing the pro-competitive benefits of the arrangement against any anti-competitive effects. Generally speaking, only an MFN provision that is, on balance, more harmful to competition than beneficial to it will run afoul of the law.

Analysis of the potential competitive effects resulting from an MFN provision will be very fact specific and largely driven by the particulars of the parties involved, the industry in which the provision is employed, and the nuances of the market(s) in question.

It isn’t difficult to see why some clients, particularly those with significant buying power and/or market dominance might want to flex their buying muscle in this way. But there is absolutely no upside from the firms’ perspective. It is a concession that might secure the work but at what collateral cost? There will be huge compliance and audit cost and inconvenience, there is the risk that the firm is inadvertently complicit in unlawful activity and the firm could be compelled to breach other clients’ privacy. I mean seriously, what’s not to like?

Sadly our profession has a very poor track record of united opposition to this kind of deleterious trend – there will always be a firm driven by evanescent self (selfish?) interest willing to break ranks. However, we suggest that this is one development where serious consideration should be given to the profession as a whole drawing a line in the sand. Anything else seems to us to be a very slippery slope.