For many law firms, this means fewer billable hours. If AI will allow document review for example, in a fraction of the time it used to take, that's someone's billable hours target out the window. The use of AI in legal service delivery is exciting and represents a great opportunity, particularly for early adopters, but it has a vicious sting in the tail. Something will have to change with traditional pricing models.

“I saw the future of the legal industry in a warehouse in Shoreditch. That perhaps sounds like an unusual thing to say about a $700 billion global market, but after visiting a legal tech company yesterday in London’s most dynamic quarter the true scale of what could happen to the legal sector was laid bare.”

So begins Richard Troman’s excellent article, ‘AI and the new business model’ which we encourage you to read.

We have been thinking about AI from a pricing perspective for some time so earlier this week we picked up that theme for the latest bi-monthly Validatum Pricing Forum® (kindly hosted by CMS Cameron McKenna), an invitation-only event for anyone in UK top 100 law firms that has an interest or involvement in the firm’s pricing function.

We were a little surprised (pleasantly) at the numbers (35) given what we thought was the relatively niche title of the session, ‘The perfect pricing storm; artificial intelligence and hourly billing’.

Before you stop reading on the basis that AI isn't really on your agenda at the moment, we would encourage you to read on as we took the opportunity to poll the audience with several live on-screen and anonymous questions, the results of which took us by surprise. They are set out later in this post.

The fundamental premise of the session was a fairly straightforward one; without very careful thought around pricing strategy, firms that rush headlong into the new technology run the risk of a double whammy - the cost associated with investing in the technology and some fee earners finding that their bread-and-butter work (rudimentary document review and the like) can be done in a small fraction of the time that they would normally devote to cranking out billable hours.

Result? More expense and less revenue. Not something to get particularly excited about on the face of it.

Rick Seabrook, the European managing director of Neota Logic presented the first part of the session, outlining the different kinds of artificial intelligence clustered under that nomenclature and then proceeded to outline some of the uses and applications to which the new software is being put by law firms in the UK and the US.

We outlined a number of initiatives that we believe that firms could usefully think about either as a precursor to or at the very least in conjunction with the deployment of AI or indeed any technology for that matter the will result in certain work streams being undertaken more efficiently, for which one can almost inevitably read, a reduction in billable hours.

We think that this is a timing issue and that firms are going to need to approach this in two stages. Moving to the endgame, Stage 2 will necessitate systemic change to the way that some services are currently provided. Clients do not mind paying and even paying very solidly for the cerebral, tactical, strategic and experience-driven advice capable of being provided by experienced and seasoned partners. They are considerably less willing to pay for things that they regard as procedural and generally ‘low-rent’.

This is likely to see the traditional pyramid inverted. This isn't necessarily a bad thing (unless you are in the early stages of your career) as firms are going to need more and more senior people in order to deliver what clients regard as real value. From the firm's perspective, this should be recognised as both a problem and an opportunity, the opportunity being for firms to simultaneously offer cost savings and efficiency on the procedural work but take an extremely robust view of pricing work being undertaken by senior people.

In so doing, there is the potential to achieve some set-off.

Stage 1 will involve a number of strategies to protect margins while the more systemic changes are given effect to.

To begin with, we should be cognisant of the pricing life-cycle which runs broadly in tandem with the traditional innovation adoption life-cycle with innovators, early adopters, early maturity, late maturity and laggards.

The pricing life-cycle equivalent recording the revenue and profit curves follows a similar pattern with introduction, growth, maturity and decline. 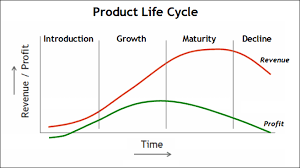 Put simply, there is an opportunity for early adopters and innovators to preserve reasonable margins while the use of the technology remains relatively novel and sparsely distributed.

There is an important distinction between doing the same thing more efficiently versus using the technology to do new stuff. The technology will have to be reimagined so that old work is done faster and new revenue streams are opened.

In other words, simply doing the same jobs that have always been done but doing them faster and more efficiently will result in a substantial reduction in revenue. One way to address this is to move from low volume, high margin to high volume, low margin.

For example, the largest employment law firm in the US, Littler & Mendelson developed subscription based cloud software that any employer (including those that are not clients of the firm) can log into, enter various information and have the software automatically produce a report advising whether the particular person the employer is concerned about, is technically speaking an employee or an independent contractor with all the attendant income tax, pensions and related implications.

Since the software was made available six months ago, it has been accessed (and paid for) thousands of times, mostly by companies that are not (yet) clients of the firm in the traditional sense.

There are many other initiatives that firms can deploy in both the short and medium term to mitigate the effects of the introduction of technology that achieves greater efficiencies and cost savings from the client's point of view but which will inevitably financially harm those firms that retain a significant dependence upon hourly billing as the predominant pricing model.

Coming back to the questions we asked the audience, it is worth first flagging a question that was asked in the recent Lexis Nexis Bellwether Report about the adoption of technology generally amongst law firms.

As can be seen from the table below, in relation to artificial intelligence, 28% said that they don't use it but that it would be nice to have and a very significant 59% said that it is not needed. 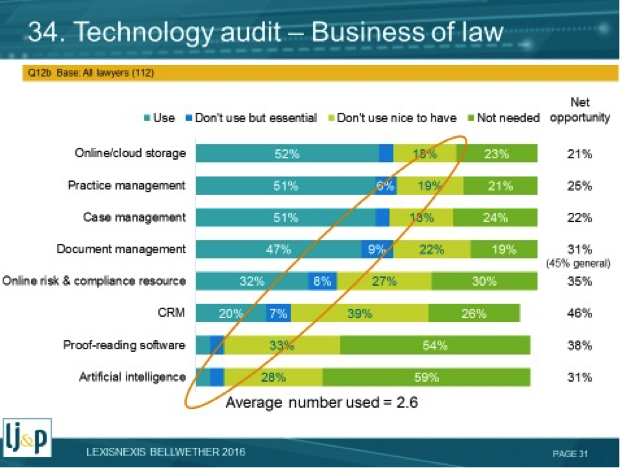 We confess to some surprise at how apparently sanguine so many firms are particularly when one considers the answers to the anonymous questions we posed on-screen at the Forum. We leave you to draw your own conclusions.

We are collaborating with Nayeem Syed, Assistant General Counsel at Thompson Reuters on a more extensive two-part article series on this topic. Watch this space. 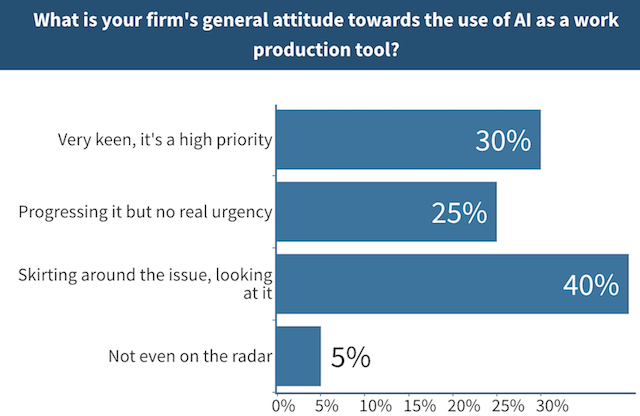 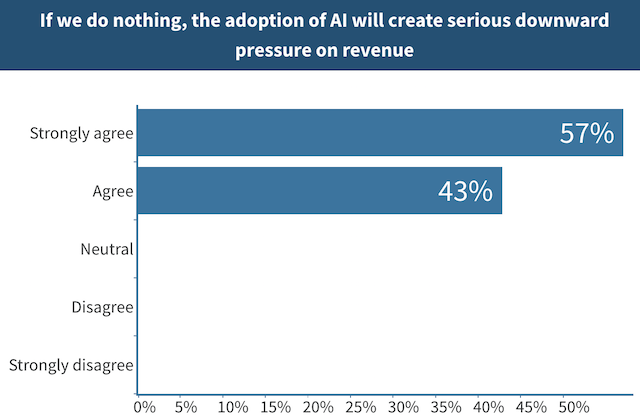 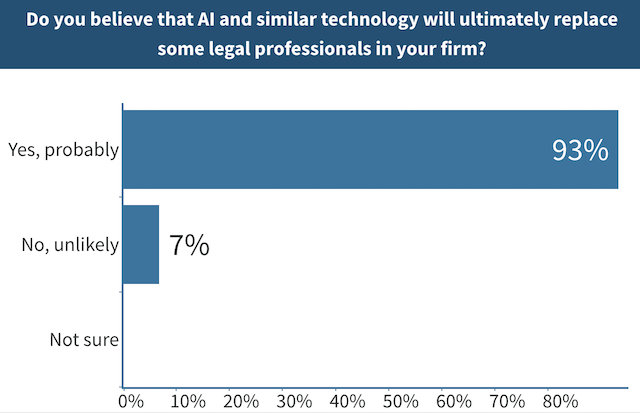