The Power of Irrational Pricing

When presented with a range of pricing choices, are client’s more likely to make a rational or irrational decision? In recent years behavioural economists have generally supported the concept of ‘homoeconomicus”; buyers characterised as powerful, calculating decision-makers who base their decisions on rational, objective and consistent preferences.

For over a decade, we have taught the law firms that we work with, the concept of providing clients with pricing choice. This manifests itself in a clear articulation of several discrete pricing methodologies to the client at the outset of the matter. The pros and cons of each of them from the client's perspective are also clearly articulated and the client is then invited to select the best one from their perspective.

There are numerous advantages to this including the client seeing that they have greater control and involvement, the obvious benefits of a well thought out pricing conversation at the beginning of the matter rather than the end and shared clarity of expectation.

There are however numerous other benefits, one of which is rooted in the idea that pricing is contextual. This means that a price presented in the abstract makes it extremely difficult for clients to make a decision. Most people don't know what they want until they see it in context. In other words, buying decisions are much easier for the client if presented as part of a number of price offerings against which they will make trade-offs around price, quality, timeliness and a host of other factors.

Those trade-offs may be rational or they may be irrational. It makes no difference. All that is important is that any of the price offerings are acceptable to the firm and the client is happy with their choice.

Client 'willingness to pay' (a specific pricing concept) has less to do with the service itself and more to do with the context in which it is sold and how it is presented.

An intriguing example emerged a few years ago with an offer proposed by The Economist, in which the annual subscription to the online version of the magazine was sold for $59, and the subscription for the paper edition and the one for both versions together was sold at $125.

Professor Dan Ariely, a scholar at MIT decided to test the effect of the same offer without including the disfavoured version i.e. the paper-only edition. The result was the structure of the offer adopted by The Economist exploited a concept known as the 'deal effect' that enabled them to enhance the sales of the more expensive product when compared with the alternatives. In other words, despite being more expensive, the premium option seemed to be a better deal.

The 'deal' (perception of superior value) was more important to subscribers than the actual cost in monetary terms. 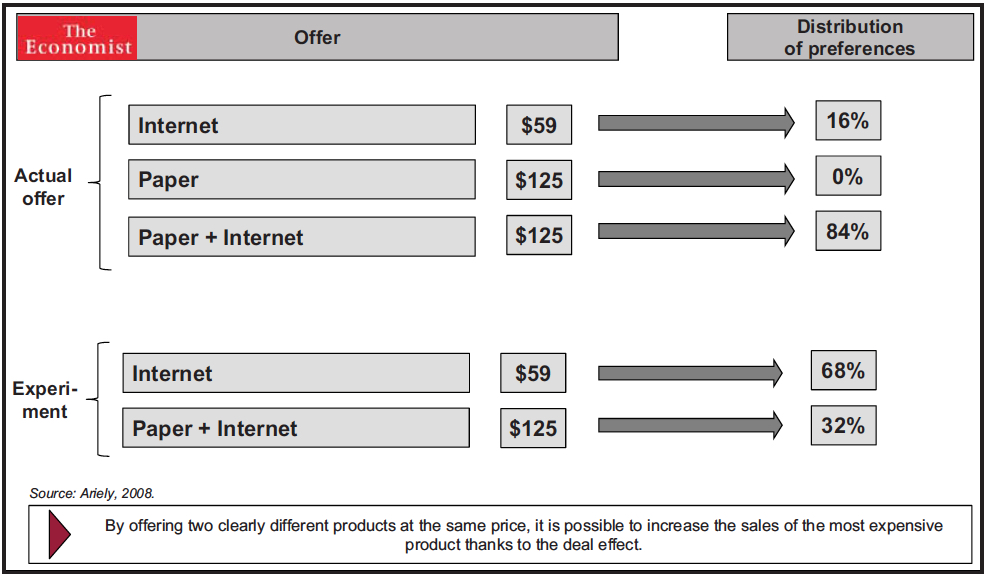 It is evident that the package's attractiveness was not intrinsic, but rather, relative. It was determined by its convenience with respect to the paper-only option. It was not the combined package that was good but rather, the paper version was seen as comparatively poor value.

This sort of insight has numerous practical applications in the pricing of legal services. For example:

Most specialists in the pricing world would acknowledge that pricing is part art and part science. We agree. However, we should also not assume that it is art and science in equal measure. There is considerably more science involved in pricing than merely gut feel.

Firms' willingness and ability to understand and harness that knowledge will increasingly provide those firms with a tactical and strategic advantage over their competitors as well as better satisfying client pricing expectations.